Here is How To Throw a Blockbuster Block Party without busting your Budget! We have always loved working with people for block parties because of their unique vibe. Block parties can be legendary in a way other parties cannot be. Since the residents are all nearby, a good block party results in endless discussions for many days. It is also remembered often, because the people who attended meet a lot. If you are trying to organize a block party then you should know that you have been entrusted with a great responsibility.

Block parties aren’t meant to raise money or just to be fun; they are supposed to be a celebration of the block. What this usually means is that the budget of a block party is mostly limited. Since most of the financial support comes from local businesses and residents there isn’t much money available to spend on the party. This, however, shouldn’t be limiting your imagination. The reason that you can succeed at arranging a fantastic block party on a budget is due to the vibe of a block party. People haven’t travelled long ways to come to the party; they are partying where they live. 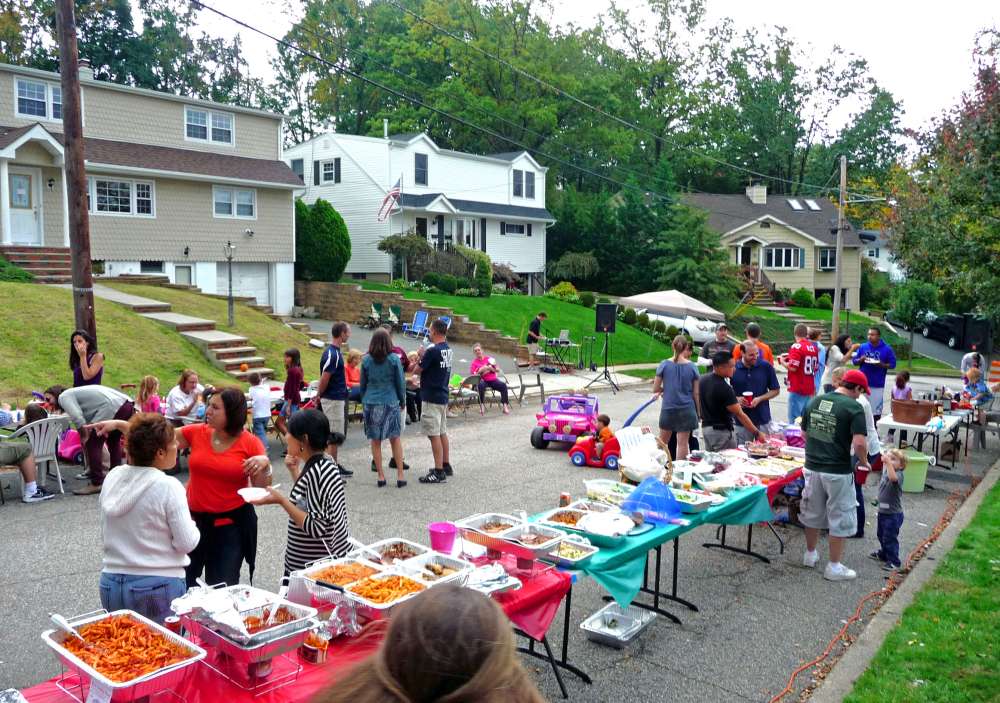 This is the biggest mistake we see when people arrange block parties. You do not need to spend half your budget on décor or other visuals. You do not have to worry about prettying up the block. The people at the party aren’t people who will be seeing the block for the first time; they will be people who know that block. Any money you spend with this goal will be spent on a useless task. As we have said before, block parties have a very casual vibe. Not only will the décor cost a lot; it will also not be appreciated. If your block party has a lot of signs then you have went against what a block party is supposed to be.

Use Music as Decoration

Do you know what a blockbuster block party needs the most to be successful? It needs to be lively and fun. Putting up colorful banners doesn’t make things fun. Music, on the other hand, makes people dance and have a good time. Pick some groovy music and have it play around the block. One great idea which we saw was an organizer who put different music at moderate volumes around the block. So if you walked around the block party the mood will change from place to place. It felt great, made the party feel lively, and you could just hang around the place playing your type of music.

It also creates a stronger sense of community. Say, for example, that you put up hip-hop in one corner, classic rock in another corner, and pop music in another corner. The fans of a genre will end up congregating in the place where their music is being played; this allows people with similar musical tastes to hang out together. It creates new friends on the block which makes the block party a huge success. If you are able to create new connections at your block party then you are definitely doing something right. The best part is that you do not need big speakers to play music at a moderate volume; simply get some home speakers from your own home and your friends. This way you can liven up the whole party without spending a single dollar.

Don’t have the money for professional performers? Don’t worry; simply include a talent show in your block party. Talent shows are fantastic not just because they cost so little, but also because they involve in people being much more engaged. It involves the kids and adults both. We would recommend dividing the talent show into two; one for adults and one for kids. Kids at talent shows are cute and the activity will attract a lot of families.

A talent show for adults, on the other hand, will be a hit with the teenagers and young people in general. Talent shows are a great venue for residents with musical skills to show off their skills. Plus, no block party is complete without an amateur band doing bad music on cheap instruments! It sounds like a bad thing, but believe us, it makes the blockbuster block party much better. 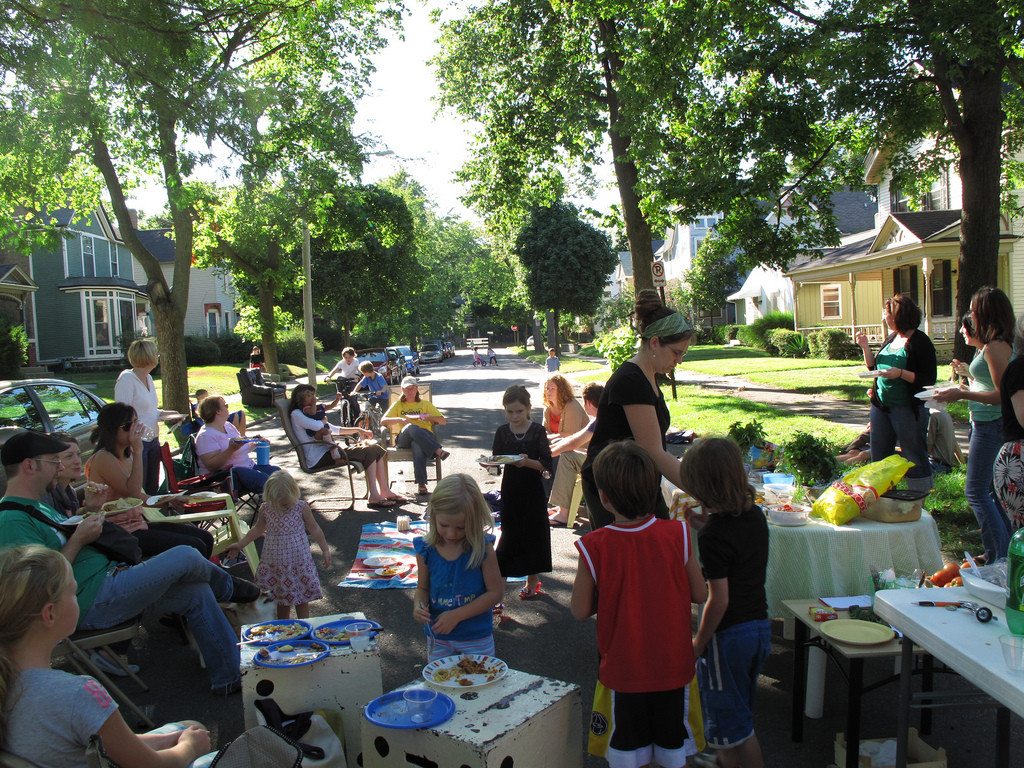 This is a great idea but make sure you clear it with the local authorities for safety purposes. Encourage people to bring out their grills and cook some food! This one depends on the culture in your area and it only works if the residents are good friends with each other. If the block is a close one then this idea will be a hit; people out grilling while music plays is always a fun thing. Do make sure that you provide a proper space for the grills as you do not want any fire to be in a dangerous area.

If you find enough enthusiastic people then this will be a blast. Tell everyone that the parade is going to be a fun casual thing and they can dress as whatever they want. Trust us, it is a very fun sight to see people dressed as superheroes and other characters parade like they are serious. It also livens up the whole party; make the parade go round the whole block again and again and everyone will have a great time.

If you want to up the ante even further, guide the people in the parade around the different activities you set up and make them participate in each one. Soon you will have created a train of people doing fun things around the block and everyone will be having fun.

Put up an inflatable obstacle course or an 24 foot mobile rock climbing wall and you will be surprised to see how much people love it. The activity area is the perfect place to have kids enjoy for the whole day. It doesn’t have to be restricted to the kids though, you can get bigger slides and obstacle courses for adults as well. These are fun because they make sure that there is always something thrilling to do at the party. If you really want to amp things up then we would recommend putting on some pumping loud music in the activity area. Play something with a lot of guitars and drums and people will be having the time of their life climbing walls and having fun.

Another great way to make the block party memorable is to hand out awards. As long as you keep the categories fun the award show will be fantastic. Do not try to do this activity seriously, as that will only result in people being bitter if they don’t win. Do it as a joke instead. You can have categories like “Funniest person in the block”, “most fashionable dad”, “loudest car in the neighborhood”, and other similar categories through which you can make some light jokes.

Don’t spend too money on the awards. You can also hand out certificates which you can print with any printer to bring the costs even lower.

Spread a lot of photos on social networks

If you want people to remember the block party as something special make, sure you take a lot of photos. Then you need to make these photos available on social media. People love seeing pictures of themselves and their friends. Better yet, make sure you get the best photos from the different happenings in the party. This means separate album for the talent show, separate album for the activity area (make sure you have some action shots of people jumping or climbing!), and pictures of people dancing as well.

There are loads of other things you can try as well. You can encourage kids to put up little stalls from where they sell stuff. Kids can sell lemonade, cookies, or anything that they themselves are interested in. We love this idea because it teaches kids a good lesson. Kids love it because they get money they can spend on toys. Attendees love it because it’s fun to buy stuff from local kids who are delighted on ever sale. You can also create an art gallery; encourage people to paint and draw things you can put on display and entertain people with.

This site uses Akismet to reduce spam. Learn how your comment data is processed.